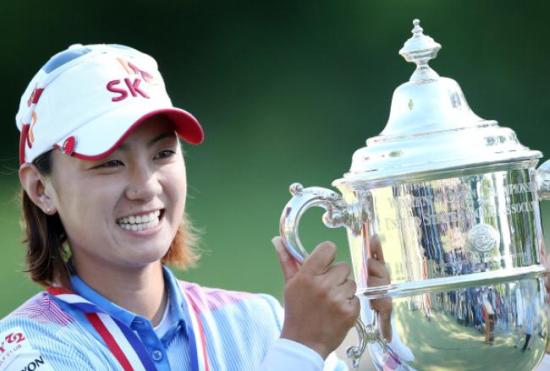 On Na Yeon Choi’s victory
Golf Channel analyst Judy Rankin: “She has step by step put it all together. She is a very complete player. If you watched her this week, you know that she is a very composed player. That has to bode well for a young woman who still has not even hit the prime of her golf life.”

Golf Channel on-course reporter Jerry Foltz interviewed Na Yeon Choi following her victory
Choi, on her win: “I had a lot of confidence today, especially with this golf course. I like this golf course. I enjoyed it with my group today. I finished strong this season and I’m really satisfied.”

Choi, on winning the two biggest first place checks on the 2012 LPGA Tour season (CME Group Titleholders and the U.S. Women’s Open): “I am really happy with how I played this season. I won my first major tournament and even this tournament is very big to me.”

Park, on her turnaround in 2012: “Earlier in the season, I wasn’t rolling the ball great. I just couldn’t find the right putter and the right stroke for me. After Wegmans, the putter just starting rolling really good and I was really confident with my putter. I think that was the difference.”

Park, on which trophy means more to her: “They are both really important and they both mean a lot to me. I think the Vare Trophy is the tougher trophy to win because even the last tournament I had to push myself to play good, and until the last round I couldn’t be relaxed. This tournament felt so long, longer than the whole season. That tells me a lot.”
Posted by Scott Stevens at 7:12 AM

Add comment
Load more...
Newer Post Older Post Home
Subscribe to: Post Comments (Atom)
Welcome to Eat Sleep Golf - The Okanagan. Have a look around as we continue to shine light on the innovation and creativity found throughout the Okanagan golf community.